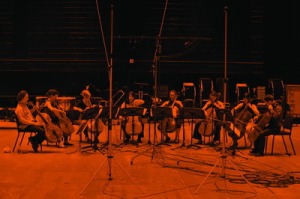 That the classical music world should visit jazz repertory is not without precedent. As the saying goes, there’s nothing new under the sun. However, the spirits summoned here belong to that of visionary musician and internationally renowned cellist Matt Haimovitz and respected composer/arranger David Sanford. Together with the eight-piece cello ensemble, Uccello, the duo reconfigure classics by jazz masters from the 1920s to the 1970s, their respect for the original compositions coupled with imagination and tremendous virtuoso displays from Haimovitz. The participation of guitarist John McLaughlin on one of two Mahavishnu Orchestra  numbers, drummer Matt Wilson and keyboardist Jan Jarczyk, lends an added dimension and additional vibrancy to several of the tracks. At the end of the day though, it is the ingenious layers of so many cellos, with their singular timbre, which brings energy, swing and luster to these decades-old compositions.

The familiar melody of “Open Country Joy ” from the Mahavishnu Orchestra’s Birds of Fire (Columbia, 1973) has a serenely pastoral feel but soon gives way to five riffing cellos, which unite in the lightening fast glissandos of McLaughlin’s composition. The English guitarist delivers a weaving solo which displays his trademark rapid lines, and a relaxed blues on the gorgeous, country-ish conclusion where Haimovitz boldly takes on the role of violinist Jerry Goodman in a solo of remarkable fluidity in the high registers of his cello.

The other Mahavishnu Orchestra track, “Meeting of the Spirits” from Inner Mounting Flame (Columbia, 1971), does not feature McLaughlin but nevertheless succeeds in capturing the power and the brooding, almost menacing atmosphere of the original. Haimovitz again solos magnificently, driven by propulsive percusive effects. Jarczyk reprises the role of Jan Hammer and brings his personal sound to a solo which sticks closely to the original. So striking are these arrangements and interpretations of McLaughlin’s compositions that a full CD of Mahavishnu Orchestra material by this cello ensemble would be welcome indeed.

The same could be said for the music of trumpeter Miles Davis, represented here by a velvety, gently swinging version of “Half Nelson.” All eight cellos from the Schulich school of Music at McGill University, Montreal, combine to create a lush, warm voice on a performance inspired by the style of the 1949/50 Birth of the Cool sessions. In a nice piece of synchronicity, the version on Workin’ with the Miles Davis Quintet (Prestige, 1959) featured Paul Chambers playing the bass line on cello.

For the most part, both arranger Sanford and soloist Haimovitz fairly closely follow the original melodic contours of the music on all the compositions. The opening bass salvo on Charles Mingus’s “Haitian Fight Song”” is recreated note for note, while Jaki Byard’s original piano solo is beautifully scored for pizzicato cellos. Haimovitz recreates the underrated saxophonist Booker Ervin’s solo in a powerful arrangement which captures the driving, celebratory mood of Mingus’s tribute to the Haitian slaves’ uprising of 1791 led by Toussaint L’Overture (the only permanently successful slave uprising in history). The full cello ensemble does justice to the deep blues, swing and orchestral quality of Mingus’ classic.

There’s a wonderful interpretation of pianist John Lewis’s Bach-inspired “Blues in A Minor,” here played as a duet between Haimovitz and Dominic Painchaud. The duo evokes the classically edged blues of the Modern Jazz Quartet, and the spirit of bassist Percy Heath. The performance of composer/arranger Billy Strayhorn’s “Blood Count” has all the sad beauty of the original—his final composition for Duke Ellington, written from his hospital bed. Haimovitz’s solo evokes the sympathetic solo of alto saxophonist Johnny Hodges on this bittersweet masterpiece.

Sanford’s original composition, “Tryptich,” is a surging mood piece with repeated figures and layered circular motifs which, according to the composer, takes keyboard players Vijay Iyer and Nik Bartsch as its sources of inspiration. All eight cellos invest power in a contemporary sounding piece, which nevertheless does not sound out of place even alongside modernists such as saxophonist Ornette Coleman, whose “W.R.U.” is taken to the boil with Wilson’s tight, driving rhythms to the fore. Haimovitz again displays his virtuosity and incredible range on the mellow “Liza” by George Gershwin. In what is clearly a homage to the Quintette Hot Club de France, the lead cellist solos first in the gypsy style of guitarist Django Reinhardt and then in the singing voice of violinist Stephane Grappelli.

Meeting of the Spirits is a captivating recording from start to finish and it is little surprise that it has been Grammy nominated. Haimovitz and Sanford have created a work of great beauty. It succeeds in highlighting the common threads of ingenuity, power and lyricism which run through these compositions regardless of age or genre. It should also lure some of the more entrenched classical and jazz fans across their mutual divide. Let’s hope that this isn’t the last recording from Haimovitz, Sanford and Uccello that delves into jazz; after all, there is the little matter of the last 35 years of jazz still to explore.

View article at All About Jazz