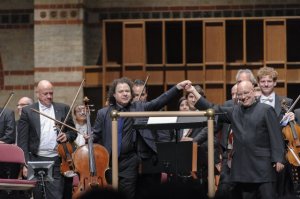 Performed by Matt Haimovitz-Dennis Russell Davies and the Cincinnati Symphony Orchestra
Like a lot of people, I first became aware of Philip Glass’ music through his soundtrack work, especially for the films ‘Koyaanisquatsi’, ‘Kundun’ and ‘Powaqqatsi.’  Something in Glass’ approach with his use of repetitive themes and patterns leant itself perfectly to the aesthetics of cinema, which encouraged me to consider his other work.  Over the years, I have sought out many of his recordings, some of which I truly enjoyed while others – such as his orchestration of David Bowie and Brian Eno’s ‘Low’ – are so irritating that I’ve never been able to listen to them all the way through.   Still, operatic and symphonic works like ‘Einstein on the Beach’, ‘Satyagraha’ (his homage to Gandhi) and ‘Akhnaten’ are each so interesting and groundbreaking that I’ll probably always return to them and still hear something new and worthwhile in their conception and execution.
Yet as the years have passed, the influence of Glass’ form of minimalism has diminished and the style of music hasn’t really aged all that well.  It’s hard to know why, really.  Perhaps other composers like Brian Eno have stolen part of his thunder with their more easily assimilated ambient music.  There’s always been an intellectual ferocity to Glass – whether he’s discussing transcribing Indian music or scoring Leonard Cohen’s poetry – that may be somewhat alienating for some people, but I don’t think that’s accounts for his current lack of acceptance.  His style has been much emulated and we can hear Glass-like music in television commercials and video games, but these imitators never quite ‘get it’, with the result that a great deal of minimalist music sounds emotionally remote and reflects a kind of technological coldness.  This is of course very unfortunate, given Glass’ great humanism as reflected by his Buddhist ethics, vegetarianism and support for a free Tibet amongst other things.
Whatever the cause of minimalism’s retreat from the spotlight, I stopped listening to Philip Glass nearly 20 years ago and never looked back until 2001 when I had the chance to hear him perform live in Hong Kong as a part of the city’s arts festival.  He and his band played the soundtrack to ‘Dracula’ in real time while the movie played behind them.  In this setting, all of the things I first loved about Glass’ approach came back to me, and I was hooked again.  So, when I read that Glass had composed the soundtrack to ‘Naqoyqatsi:Life as War’, the third in the ‘Koyaanisquatsi’ trilogy, I was really excited, but unfortunately when I saw the film, I was totally disappointed.  Not only was the film a pretentious mess, but to make matters worse, the music was abrasive, irritating and ultimately forgettable.  So, when I read that The Cincinnati Orchestra had commissioned Glass to rewrite the music as a cello concerto for Montreal cellist Matt Haimovitz , I was underwhelmed and probably wouldn’t have given it a listen if not for the promotional CD that arrived in the mail. It sat in my office for a few weeks, staring at me until it got the best of my curiosity and willed me to play it.
I am glad I did. 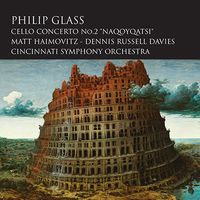 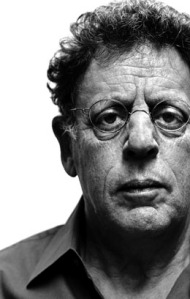 The music is incomparable.  To say it sounds much better in its recasting is an understatement.  It’s likeba different composition.  Reimagined, deepened, ‘warmed up’ and expanded, the six movements that make up Philip Glass’ Cello Concerto No. 2 more than stand on their own.  Of these six pieces, three of them sound like vintage Glass with their swirling repetitions and patterned themes, and they are the less successful and interesting than the others.  Listening to ‘Naqoyqatsi’, the first movement of the concerto, I found myself fighting irritation and impatience once the percussive introduction began to fade and Glass’ repeating patterns asserted their dominance, but then something began to change this impression.  Just over a minute into the composition, the solo cello makes an appearance by picking up on the main theme before it begins to gently pull away, comment on the rhythms and play around with the melody.  A great warmth begins to seep in as the cello continues to define its own territory and the listener begins to fall under the spell of all the suggestion contained in the music.
The rest of the symphonic movements in the concerto express a similar relationship between the cello and other instruments.  On ‘Point Blank’, the rather brisk and aggressive sixth movement, Haimovitz’s cello sounds like a blunt knife sawing away at a rope hanging over a precipice, which suggests a human presence in a piece that is otherwise almost unspeakably remote.  At other times, one can imagine Glass and Haimovitz smiling as the music they’ve concocted wouldn’t sound out of place in a silent movie scene – the kind with the girl tied to the railroad tracks while Harold Lloyd fumbles his way to the rescue.
The real reason to hear this recording, the thing that makes it indispensible is the seventh and final track, the solo cello suite, ‘The Vivid Unknown.’  Spare, yearning, yet endlessly suggestive, this section contains some of the most achingly beautiful music ever written for the cello.  Passages within it are truly the equal of Bach’s Cello Suites or Haydn’s Cello Concerto No.2.  It really is that good.
If it’s been some time since you’ve given Philip Glass’ music the time of day, give this recording a try.  For those who haven’t heard any of Glass’ music, ‘Cello Concerto No.2’ with Matt Haimovitz may be the perfect place to start.
Review by Douglas Heselgrave
Read at: Restlessadreal