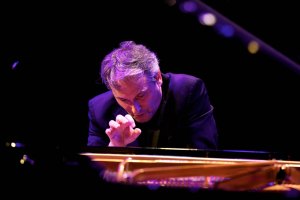 Christopher O’Riley performs an illustrious series of Liszt transcriptions—each brilliant, audacious, and sensuous in its own way, a dazzling tribute to the transcriber and architect of keyboard magic.

Liszt the transcriber provided an immense service to music and to music-education, touring with concert and operatic works that would otherwise remain unavailable to the public, especially in towns and villages which lacked the necessary means and resources to mount symphonic and operatic productions. But rather than conceive his various reminiscences, paraphrases, and transcriptions as piano “reductions,” Liszt allowed his naturally flamboyant personality to augment the keyboard palette by way of his own compositional devices, which, when complemented by his own poetic temperament, often illuminated his chosen scores with new insight and impetus.

Christopher O’Riley (rec. 15-18 March 2012) performs on a refurbished Steinway formerly owned by the Chamber Music Society of Lincoln Center, an instrument worked on by both Franz Mohr – Horowitz’s technician – and Mike Tola, the latter of whom reshaped the hammer action. The boldest benefactor of this revivification process doubtless is Berlioz, whose already brilliant 1830 Symphonie Fantastique, so well conceived directly for orchestra, now assumes a volatility that the keyboard alone can bestow on a fertile score. The opening movement, Reveries – Passions, gains an exotic and drunken fluency when O’Riley lays on fourths and cascading octaves whose clarity now rings with staggering effect. O’Riley applies the same technique to the Witches’ Sabbath, augmenting the sound of tolling bells with overtones and layered fourths. In order to maintain some degree of dynamic contrast, Liszt himself specifies the una corda and sempre una corda designation to allow crescendos (and tacit tympani entries) their full dramatic effect.  Un Ball sequence glimmers and scintillates in its images of the feverish ballroom dominated by the protagonist’s vision of the beloved, his idée fixe, as she sways and then orbits in colossally erotic gestures. The last page, exulting in tremolos, virtually shatters the chandeliers.

For the keyboard alone to maintain the color tension of the Scene aux Champs must count as a coup, so kudos to O’Riley. As a piano piece, the tone-poem has more in common with the likes of Alkan and the Liszt-Busoni ‘school’ than its wonted realization for orchestra. O’Riley occasionally speeds up a transition passage, adding a new rhythmic or melodic layer to the score, a virtual new interpretation. The alternating counterpoint in roulades and arpeggios could serve as a competition etude. A storm breaks out in the midst of the verdant scene, a passing homage to Beethoven’s Pastoral. Plenty of bass action paints the fateful Marche au Supplice, staccati and a chromatic bass line leading to a shattering march in block chords. We feel the abyss literally churning before us; the maw of Hell awaits. When Liszt himself performed this movement, according to Charles Halle, Liszt created “an indescribable furor.” Well, shake hands with O’Riley’s own galloping, kaleidoscopic, and polyphonic devils! Our protagonist’s head, having bounced off the scaffold and into the waiting basket, now enjoys the immensely “private” tour of his personal Inferno, in which his “immortal beloved” assumes every grotesquerie. Do I detect even an Irish jig in O’Riley’s irreverent dream of a Witches’ Sabbath? That the Berlioz version of the Dies Irae and Liszt’s own Totentanz share many of the same sonorities seems here a sonic and cosmic inevitability. Liszt once congratulated his acolyte Karl Tausig on his “fingers of steel,” which Liszt called “infallible.” Can we say less of Christopher O’Riley?

The first disc by O’Riley, consisting of relatively smaller works, presents hardly less ambition in its demonic and poetic offerings. Among the most audacious of the works looms the Don Juan Fantasy, a brilliant tour de force after Mozart’s rake that rather redeems his blasphemous character. Splicing the seduction duet “La ci darem la mono” as a series of variants and Giovanni’s so-called “Champagne aria” (Fin ch’han del vino), his now-thrilling “conquest” aria, Liszt weaves a monumental tapestry for the virtuoso, braced by the Commandatore’s D Minor portents of Hell itself. If we find correspondences in Liszt’s Dante Sonata, the analogy is well made, since Don Giovanni has made a lethal pact with the Devil. Even more than the classic Charles Rosen performance – all brain and pellucid fingers with little eroticism – O’Riley’s bravura performance rings both playfully lyric and sensuously threatening, a just combination.

A respite, as it were, comes in the form of Schumann’s homage to Spring Night, only in Liszt’s aggrandized and elongated version, which often imitates aspects of Chopin’s Nouvelles Etudes. The gestures have become grand, even bombastic, but all in deference to the poetic power of the solo keyboard.

But next we tread into the most passionate of worlds, Wagner’s Love-Death from Tristan und Isolde, by way of editions from Liszt, Moszkowski, and O’Riley, especially reliant on Moszkowski’s emphasis on the top line of the orchestral prelude. The layering of tremolo effects creates a throbbing pulse in the bass line, countered by the drooping melodic line of Isolde’s lament. How did one poetic muse characterize this passionate music, as the ivy and vine? O’Riley’s flowing treble line has all the plasticity and vertical detail that fires this music into a whirlpool of self-effacement, the individual’s succumbing to a higher yet baser power.

O’Riley means his playing of Schubert’s Fruhlinglaube as an intermission prior to the massive Berlioz. For me, this played as an encore after the Wagner. O’Riley concentrates on the melody’s legato and keening character to sustain the illusion of vocal sostenuto. The relative restraint of Liszt’s transcription of Springtime sensibility finally yields to a brief, virtuosic cadenza that O’Riley negotiates seamlessly. A fine aural document, this recording owes much of its success to Judith Sherman, recording producer and to Mickey Houlihan, recording engineer for Wind Over the Earth, Boulder, Colorado.