Matt Haimovitz and Christopher O’Riley, two fearless musicians who have bonded over common musical passions of wide range and scope, reunite for BEETHOVEN, Period., an illuminating voyage back to the birth of the cello/piano genre with Beethoven’s Sonatas for Pianoforte and Cello. Grammy-nominated Matt Haimovitz, praised as a musical visionary in pushing the boundaries of classical music performance, and O’Riley, acclaimed for his engaging and deeply committed performances and known to millions as the host of NPR’s From the Top, turn back the clock to record for the first time on period instruments – Haimovitz’s Venetian Matteo Gofriller cello of 1710 set up with gut strings and an early 19th century tailpiece, and O’Riley with an 1823 original Broadwood fortepiano. The new recording on two SACDs is available internationally on February 1, 2015 on the PENTATONE Oxingale Series.

Haimovitz and O’Riley take BEETHOVEN, Period. on tour-sampling a variety of fortepianos en route-starting in Los Angeles on January 29, through April 11, when they perform at the Metropolitan Museum of Art in New York City.Complete tour dates and details below.

“Each time I approach Beethoven’s Sonatas and Variations for Piano and Cello is a life-affirming milestone,” says Haimovitz, who wrote his undergraduate thesis on the Beethoven Sonatas at Harvard University twenty years ago, “To grapple with the composer’s uncompromising vision, and his ideal of equality and balance. Yet, nothing could have prepared me and Chris for the revelation of exploring these works using period instruments. With this setup, the fact that the cello can easily overpower its partner changes everything. Suddenly, the consideration is no longer “how can the cello cut through the multi-voiced powerhouse of a concert grand piano,” but “how can it make room for the nuances of the 19th century fortepiano?””

For his part, O’Riley, who has recorded extensively on a variety of instruments, was amazed by the problem-free 1823 fortepiano: “It was exceedingly unexpected and astonishing to find that this nearly 200-year old instrument was in such immaculate condition. I’d place this in my Top Five instruments I’ve ever played.”

Finding the ideal tuning was also revelatory. While there were a variety of tunings in use in Beethoven’s Vienna, Matt and Chris found that their instruments resonated ideally at A=430, a microtone lower than the modern A=440 and higher than the Baroque A=415. “I think we all vibrate a little better at that pitch,” says O’Riley.

The cellist Matt Haimovitz with a Bohemian cello from 1770. Photo by Stephen Woolf

For Haimovitz and O’Riley, there is no more fascinating, influential, and documented figure than Beethoven. And, centuries before the duo blurred the lines between Radiohead and Stravinsky – as in their acclaimed Shuffle.Play.Listen for the Oxingale label – Beethoven had already embraced vernaculars within his music, using popular themes of the day by Mozart and Handel in his Variations. Returning to the cello and piano over three important periods in his career – early, middle, and late – Beethoven reveals his innermost struggles and triumphs as he marries the two disparate instruments, fearlessly unshackling the cello from its continuo origins, and confronting the challenges of its low voice in relation to the piano’s polyphony. Within a twenty-year period, Beethoven singlehandedly created and immortalized the genre. 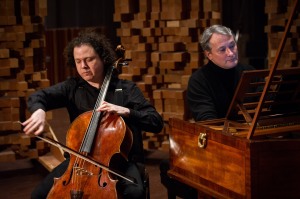 Extensive liner notes by Matt Haimovitz explore further details and insights into the Sonatas and Variations -Opus 5, Opus 69, and the Opus 102 Sonatas, completed exactly 200 years ago, in 1815. Also in the notes, William Meredith, Director of The Ira F. Brilliant Center for Beethoven Studies, and Executive Director of The American Beethoven Society, discusses the 1823 Broadwood fortepiano used in the recording.

BEETHOVEN, Period. is the debut release on the PENTATONE Oxingale Series. Oxingale Records, the trailblazing artists’ label founded in 2000 by Matt Haimovitz and composer Luna Pearl Woolf, has joined forces with the Amsterdam-based label PENTATONE, renowned for its discerning artistic quality and superior audiophile technology. The international release of BEETHOVEN, Period. will be followed by new albums and reissues from Haimovitz, Woolf, and their musical collaborators – in SACD 5.1 surround sound and as high definition downloads – on the new PENTATONE Oxingale Series.

BEETHOVEN, Period. is a Tippet Rise Production. The recording was made possible by the American Beethoven Society.

Grammy-nominated Matt Haimovitz is acclaimed for both his tremendous artistry and as a musical visionary – pushing the boundaries of classical music performance, championing new music and initiating groundbreaking collaborations, all while mentoring an award-winning studio of young cellists at McGill University’s Schulich School of Music in Montreal. Mr. Haimovitz made his debut at the age of 13, as a soloist with Zubin Mehta and the Israel Philharmonic, and at 17 he made his first recording for Deutsche Grammophon with James Levine and theChicago Symphony Orchestra. Haimovitz’s recording career encompasses more than 20 years of award-winning work on Deutsche Grammophon and his own Oxingale Records. In 2000, he made waves with his Bach “Listening-Room” Tour, for which Haimovitz took Bach’s beloved cello suites out of the concert hall and into clubs. Haimovitz’s honors include the Concert Music Award from ASCAP, the Trailblazer Award from the American Music Center, the Avery Fisher Career Grant, the Grand Prix du Disque, and the Diapason d’Or.

Acclaimed for his engaging and deeply committed performances, pianist Christopher O’Riley is known to millions as the host of NPR’s From the Top, now in its fifteenth year on air. A guest soloist with virtually all of the major American orchestras, O’Riley has also performed recitals throughout North America, Europe, and Australia. O’Riley strives to introduce new audiences to classical music with an almost missionary zeal by performing piano arrangements of music by Radiohead, Elliott Smith, Pink Floyd, and Nirvana alongside traditional classical repertoire. A prolific recording artist, O’Riley has recorded for Sony Classical, Oxingale Records, RCA Red Seal, Decca, and Harmonia Mundi. He has received the prestigious Avery Fisher Career Grant and an equally coveted four-star review from Rolling Stone magazine.