Even for pioneering cellist Matt Haimovitz, recording Beethoven’s complete music for cello and piano on period instruments was an audacious step. There were musicological depths to be plumbed—based on manuscripts, first editions, and scholarly research—and practical performance issues to be addressed in order to ensure that the results of his new two-CD package on the newly minted Pentatone/Oxingale label called Beethoven, Period be simultaneously authoritative and entertaining. Throughout the project, Haimovitz had in his mind “at every second whether Beethoven would like this or not.”

Recording the Beethoven cycle had been a dream since his days at Harvard when he wrote his thesis on Beethoven’s last cello sonatas and his advisor was famed Beethoven scholar Lewis Lockwood, Haimovitz says. Once he discovered that pianist Christopher O’Riley, his frequent collaborator at experiencing music “between the genres as the iPod generations do,” loved and was conversant with old instruments himself, the two gave a few performances. “It was such a revelation,” Haimovitz says, “that when we heard Skywalker Sound was free, we decided to record the complete set.”

Playing his 1710 Matteo Goffriller cello, strung with Toro Strings’ ox gut and set up by Louis Gaucher in Montréal, and partnered by O’Riley on an 1823 Broadwood, Haimovitz is using the Beethoven cycle recordings to launch his new Pentatone initiative: Beginning this year, new albums and critically acclaimed reissues from Haimovitz and his musical collaborators will be available internationally in SACD 5.1 surround sound and as high-definition downloads.

Haimovitz’s next recording will be a second go at Bach’s Six Cello Suites using a cello piccolo for the Sixth Suite. “They will be different from my recordings of 15 years ago—which I no longer recognize,” he says. The cycle will be accompanied by a newly commissioned overture for each suite by composers Philip and Vijay Iyer, among others. Each overture will be 5-15 minutes long and will reflect music from a different part of the world using Indian modes and rhythms, Greek chant, Middle Eastern and other influences. Improvisation will play a role in Iyer’s piece, Haimovitz says, and there will be “improv in the compositional process of the other new pieces.”

At press time, Haimovitz and O’Riley planned to launch Beethoven, Period in concerts in Los Angeles and San Francisco (where the duo is in residence at the Conservatory), and at clubs and listening parties in Seattle, Eugene, and Portland, where they will “play live and also experience the music in audiophile-quality surround sound.” 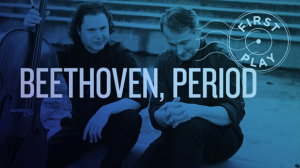