Cellist Matt Haimovitz and pianist Christopher O’Riley released their first album together in 2011, an eclectic program of clever crossover arrangements titled Shuffle.Play.Listen. Haimovitz is well-known for bringing a contemporary attitude to his performances, often performing in clubs instead of classical venues, and his interest in making exciting music with a popular feeling has won him a big following. For this 2014 hybrid SACD release on PentaTone, though, Haimovitz and O’Riley turn their attention to the pinnacle of classical music for cello and piano, the 5 Cello Sonatas of Ludwig van Beethoven. With his fans sure to follow where he leads, Haimovitz doesn’t need to add anything to this music to spice it up, and he and O’Riley approach the sonatas and three sets of variations with seriousness and dedication, if not exactly reverence. While the sonatas are played as straight as the title suggests, Haimovitz and O’Riley play with considerable emotion and élan, yet avoid making their performances seem like an academic recital. There is a lot of personality here, chiefly Haimovitz’s, and even though the music was performed on period instruments, the cello’s sound is robust, and the fortepiano is far from fragile. Still, this set might represent too much freedom for period style purists, so these energetic performances might not be for everybody and sampling is advised. [N.B. In the album’s listing, tracks 4 and 8 are reversed.] 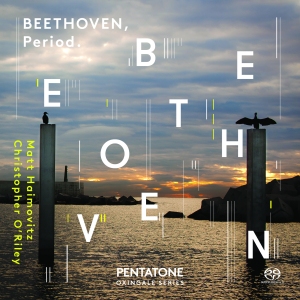