Cellist Matt Haimovitz introduced himself to  Halifax audiences Thursday night in the Cohn by giving us just what we need in anxious times, an opportunity to be wholly taken out of ourselves.

Together with Symphony Nova Scotia and conductor Bernhard Geuller, he refreshed our spirits with Antonin Dvorak’s irresistible Cello Concerto.

He is a powerful player and the concerto is full of achingly  beautiful tunes and sweeping passages.

It is both a concerto and a fully developed symphony. The orchestra is not used just to accompany, or even less, to stay in the background.  But the player pretty well has to take on a heroic sense of style to  lead its energetic forces. 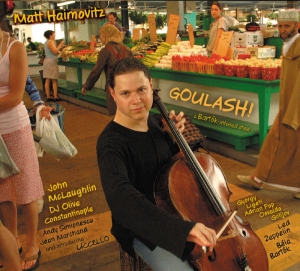 It was masterful how he and SNS and Dvorak put us in the picture. We roared our approval and at intermission there was a run on the SNS  boutique in the lobby where Haimovitz ‘s CDs flew off the table.

SNS and Gueller began the concert with the second and third of  Dvorak’s Ten Legends, originally for piano. They whetted the appetite  for the concerto and the appealing performance after intermission of Dvorak’s Eighth Symphony, in which tunefulness is even more abundant  than in the cello concerto.

Dvorak, in his music, is rare among the classical music giants of the  late 19th century in becoming a superstar without losing his  ordinariness — one reason Gueller chose to focus on his music.

The first half (Dvorak in Love) dealt with Dvorak’s lifelong,  idealized passion for one of his students, Josefina Cermakova, who did  not return his affections. After she rejected him, he wrote a series of  melancholy songs and married Josefina’s younger sister. After the  interval, the concert concentrated on Dvorak in America.

The composer was invited in the 1890s to establish a music school in  New York City (now the Juilliard School of Music).

View article at The Chronicle Herald