Bruegel’s Tower of Babel turning to a heartbeat is the opening sequence to Naqoyqatsi – Life as War – the third Qatsi collaboration between director Godfrey Reggio and composer Philip Glass.

This time the content differs in that the majority of the visuals are computer generated or manipulated. Lush colours and landscapes have been replaced by black and white, bleached, negative or S-ray images. People appear as ghosts trapped in a machine while numbers, codes, signs and kaleidoscopic patterns whizz by. This is man engaged in a battle more with himself, with his cells, genes and identity as modern life increasingly blurs the lines between real and virtual universes. Even the somewhat dated line-up of iconic personalities, from Princess Diana to George Bush, are waxworks. 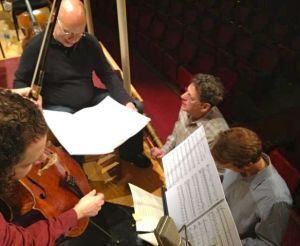 There’s a sense that Glass pursues more of his own agenda with the score and this is all to the good, particularly as his decision to write it as an extended cello concerto provides the emotional content lacking in most of the visual material. Soloist Matt Haimovitz gave a stunning performance with the small but enormously talented Philip Glass Ensemble producing the sound equivalent of a whole orchestra.