A bona-fide virtuoso, Haimovitz debuted with Zubin Mehta and the Israel Philharmonic at 13, recorded with James Levine and the Chicago Symphony Orchestra at 17, and made his Carnegie Hall debut in a string quintet with Isaac Stern, Shlomo Mintz, Pinchas Zukerman, and Mstislav Rostropovich.  However, he’s equally likely to perform at coffee houses and clubs, and was the first classical artist to play at the venerable punk club CBGB.

SoBe’s Little Stage Theater is along the lines of the latter, and Haimovitz was in his element, deftly guiding the audience through an uncompromising program of new American works for solo cello that left them clearly wanting more. While contemporary music lovers are a loyal breed, rarely does one look around the room and see the kind of smiling faces that Haimovitz’s playing elicited.

Departing from the printed program, Haimovitz offered what he called a “tasting menu” of works with a clear emotional arc. Beginning with Domenico Gabrielli’s Ricercar No. 5, Haimovitz filled the intimate black-box space with effortless playing and a warm roundness of tone from his Gofriller cello that provided a preview of the virtuosity and depth of musicality to come. 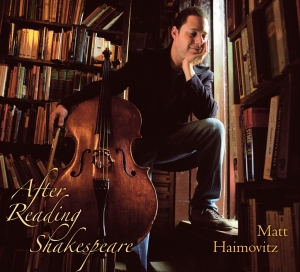 In Ned Rorem’s suite of character pieces After Reading Shakespeare, Haimovitz set the tone for each movement by reading a Shakespeare quote and then seamlessly launching into an equally dramatic performance.  Standouts were the pizzicato/arco scherzo “Titania and Oberon,” in which the intricate polyphony was clearly sculpted, and “Our minutes hasten to their end,” in which Haimovitz’s astonishingly fast figuration teetered between stratospherically high sul tasto and extremely low sul ponticello playing without any perceptible effort.  Lear, Caliban, and Iago and Othello each offered Haimovitz strongly emotional vehicles, and he executed even the most treacherous passages with a natural ease that allowed his characterizations to shine through in a tour-de-force performamce.

Equally intense was Haimovitz’s performance of American master Elliott Carter’s Figment.  Carter, who turns 103 on Sunday, is one of Haimovitz’s favorites, and he brought a fierce, brutal edge to the music often lacking in lesser performances of Carter.  Here, his rawness in the opening measures was matched by a lyrical sweetness that served to bring Carter’s composite melodies to the fore. Haimovitz’s complete command of timbral coloring on the cello was enhanced by the responsive space in which even the quietest pizzicato could be easily discerned.

Haimovitz hit his emotional and technical peak with David Sanford’s moving Seventh Avenue Kaddish.  Commissioned from Sanford in 2001 as a response to 9/11, the work posits a street musician, “somewhere between a cantor and a saxophonist,” who continues playing through the horror because it is all he can do.  Haimovitz poured out an anguished, endless frenzy of notes, his whole body in service to the music.  By turns protesting, wailing, and moaning, a mournful melody is finally distilled from the chaos.  The sublimity of Haimovitz’s performance was breathtaking.

On the lighter side was the concert closer, Osvaldo Golijov’s Omaramor, a fantasy on Carlos Gardel’s tango My Beloved Buenos Aires. Haimovitz channeled a Latin vibe with this passionate tango, fairly dancing with his instrument and building the long, tense lines of the genre with consummate skill and taste.

Dorothy Hindman is a composer whose works are regularly heard in concert halls around the world.  She is also the host of the Po Mo Show featuring classical music written since 1980 on WVUM, 90.5 FM, Coral Gables. dorothyhindman.org.