The Hamilton Philharmonic’s Masterworks Series continued tonight with Jamie Sommerville at the helm. We were given quite an evening of music, inspiration & were excited to hear “Berlioz: Queen Mab Scherzo from Roméo et Juliette”. One wonders if anyone hasn’t heard this before: – the dream sequence… a light whimsical start to tonight’s performance, musically carrying the audience to another time and place where magic and fairies abounded. The horns showed the darker side of the Queen; her mischief if you will, while the strings helped to keep us on the edge of our seats. This was truly an amazing start to the evening. We were also given the opportunity to hear Debussy’s (orch. Caplet): Clair de Lune. Of course it is classic Debussy no matter who you are. Originally a piano piece, it has been re-scored for orchestra, and tonight was played to perfection. It quite simply took my breath away.

For Saint-Saëns: Cello Concerto No. 1 – we were introduced to renowned musical pioneer, cellist Matt Haimovitz. 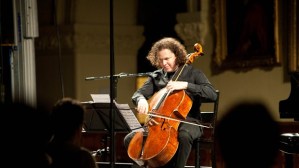 He has inspired classical music lovers and countless new listeners by bringing his artistry to concert halls and clubs, outdoor festivals and intimate coffee houses- any venue where passionate music can be heard. Before tonight’s show I always thought that this piece was best done by Jacqueline de Pre, however, my opinion has definitely changed. Haimovitz not only played this piece to perfection, but actually became part of the music. All of the mood-changes were done flawlessly, the story told with such feeling and emotion that it left us wanting more. My daughter, Jessica, was able to talk to the soloist and asked him what he enjoyed most about tonight’s performance. “I enjoyed it, I felt that everyone was listening well, the Maestro gave me complete freedom it was really free; really nice”. It was nice to have Matt with us for the first time; but hopefully not the last.

“Silent Woods “; Antonin Dvořák was an amazing composer of amazing works, this particular piece was part of a suite of piano pieces, the 5th part of the cycle for piano for four hands. Our guest cellist was back in the second half and started with this piece. The cello was played well and had such a mournful sound. The emotion and longing that were conveyed left the listener not only on the edge of their seats but also holding our breaths.

Rimsky-Korsakov: Scheherazade 1001 Nights. Our last piece of the evening was the “Arabian Nights” series, with the Sultan who is wicked and pompous being played by the horns and the Scheherazade being interpreted by the solo violin played by Jennifer Baccante, our Concertmaster for the evening. The changes in the horns show the drastic modification in the Sultan’s point of view about his wife as she tells him tale after tale for 1001 nights. We started off hearing about “The Sea and Sinbad’s Ship” and continued with “The Tale of the Kalendar Prince”, by the time we reached “The Young Prince & the Young Princess” we began hearing changes in the horns, during the “Festival at Baghdad” there is a definite transformation and one can sense that the Sultan is no longer determined to kill his wife. This is a piece that is considered to be Rimsky-Korsakov’s most popular work. The reasons for the piece’s abiding popularity are clear enough; it is a score replete with beguiling orchestral colours, fresh and piquant melodies, with a mildly oriental flavour, a rhythmic vitality largely absent from many orchestral works of the later 19th century.

Tonight’s performances were absolutely amazing and definitely something that I enjoyed both listening to, and also having the opportunity to write about it.