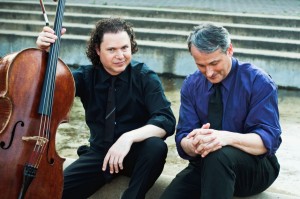 It seemed like such a natural collaboration last year when pianist Christopher O’Riley and cellist Matt Haimovitz collaborated on a recording, “Suffle.Play.Listen,” that one wondered what took them so long to come together. Both artists are at the forefront of expanding classical music through alternative venues and unusual repertoire.

So it was no surprise that their duo recital at Tannery Pond on Saturday evening concluded with an encore that brought them to their trademark turf, sophisticated arrangements of pop/rock songs. The swirling and detailed miniature was based on the song “In the Backseat,” by the Canadian band Arcade Fire.

Otherwise, the program consisted of more mainstream repertoire, all from 20th century Russian composers. The guys easily proved their mettle by offering performances that were warm and gripping.

First came Stravinsky’s Suite Italienne, which opened with a bit of fireworks. The central movement may be titled “Aria” and there was plenty of melody midway through, but the feeling of dance is what dominated. The players really stepped on the gas in the racing “Tarantella” that followed.

You could tell we were in about the same era and province with Prokofiev’s Sonata in C Major, Op. 119. But where the Stravinsky was full of sparkling articulations, the Prokofiev was legato and soulful. During many passages of dark, spiky color, it was hard not to think of the unique cellist who premiered the piece, Mstislav Rostropovich. But Haimovitz offered plenty of his own personality, including surprising textures and attacks from his bow and some finely shaped phrases.

Though these pieces were duos, Haimovitz captured most of the attention. His instrument sounded great in the hall and O’Riley seemed content to be a bit recessive. Maybe O’Riley’s gotten too comfortable in the accompaniment role after working with all those prodigies on his radio show “From the Top.”

Rachmaninoff’s Sonata in G Minor Op. 19, which came after intermission, does put the piano in the spotlight a lot more and was thus a welcome opportunity to focus on O’Riley’s always clear, luminescent touch. The piece’s third movement was certainly the highlight. It started simply, with a see-sawing little folk-like tune that goes back and forth from major to minor. Soon there’s a broader, falling melody that’s shared between cello and piano. It’s music that reaches for your heart. And on this occasion it grabbed hold and wouldn’t let go.

Joseph Dalton is a freelance writer in Troy and can be reached at Dalton@HudsonSounds.org.