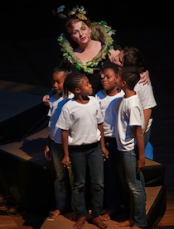 Lullabies and bedtime stories are usually close to the top of the list of most treasured early childhood memories. Few things can comfort an infant or toddler into peaceful slumber as the voice of a parent or grandparent softly intoning “Rock-a-bye Baby” or “Brahms Lullaby.” Nowadays one can augment a child’s calming bedtime rituals by merely hitting the “play” button on a CD or MP3 player.

A trio of imaginative women combined their talents to create what might become a new children’s classic.

Composer Luna Pearl Woolf, soprano Lisa Delan and best-selling children’s book author Cornelia Funke have collaborated to produce a 21st-century musical storybook they’re calling “Angel Heart.” The idea for the project had its genesis when Woolf and Delan discovered that they each had been thinking about creating an album of lullabies for children — and both agreed that Funke’s talents as a writer would fit beautifully into their plans.

Funke, who was born in Germany but now lives in Los Angeles, initially thought that such a project would be untenable but agreed to give it a try. She retreated to her backyard “writing house” and worked for three days. According to The Wall Street Journal, Funke remarked, “I sat there and the story came out by itself. … It was one of those really truly magical things.”

The next iteration of “Angel Heart” will be as a stage production presented by Cal Performances at 5 p.m. Sunday at Hertz Hall, on the UC Berkeley campus. Malcolm McDowell will narrate the work. Other artists in the production include master cellist Matt Haimovitz and Uccello, his all-cello orchestra, augmented by a couple of mandolins; countertenor Daniel Taylor; baritone Bruce Rameker; mandolinist Dana Rath; and East Bay “angel” Frederica von Stade and the children’s choir she founded at Saint Martin de Porres School in Oakland.

The “Angel Heart” book and CD set, with narration by Jeremy Irons, has just been released, and an iPad app will be released early next year.

Its storyline, which reads like an update of a classical 19th-century Brothers Grimm fairy tale, tells of a young girl whose heart has broken into a thousand pieces. She meets a guardian angel, who ushers her on a night journey, during which he enlists the help of a witch, an ominous raven-man, and spirits of the East, North, West and South on his quest to mend her.

Woolf’s score is an appealing blend of music from Humperdinck’s opera “Hansel and Gretel,” the Beatles’ song “Mother Nature’s Son” (from “The White Album”) and more, all crafted together into an ingenious orchestration that uses voices, a children’s choir and an ensemble of cellos merged with the magical tinkles of mandolins. The cello is especially attractive because of its warm, rich timbre and a range of pitch that matches the human voice — from bass through soprano…