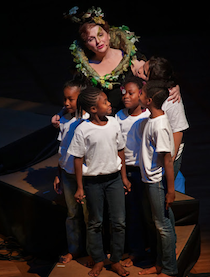 After all the hundreds of musicals that have gone down the pike, take heart, there are still unlimited ways to tell a story in music. A very different way of telling, Angel Heart, charmed its first audience, of adults and children (lots of them) in UC Berkeley’s Hertz Hall last Sunday afternoon.For one thing, there was not one composer but ten. For another, the orchestra was unique, eight cellos and a mandolin. And for scenery, fanciful projections on a large screen masking the hall’s organ.

The trigger idea of the creators, soprano Lisa Delan and composer Luna Pearl Woolf, was to draw on “tuck their children into bed” songs, lullabies, folk songs, whatever pops into a musical mother’s head, using them to cradle the story of the mending of a little girl’s broken heart. The veteran actor Malcolm McDowell narrated as four costumed singers took turns developing the story for their own stage audience, about two-dozen children of the Children’s Choir of St. Martin de Porres School, West Oakland.

There was Frederica von Stade (a patron and volunteer at that school), leading off with the evening’s theme song, “All Through the Night” (with additional verses by Gordon Getty). Of course, while the melody of this and other songs like “O Waly, Waly,” “Danny Boy,” and the “Evening Prayer” duet from Humperdinck’s Hansel and Gretel were unchanged, the accompaniments were all imaginatively recreated, re-harmonized, the voicing and interplay of the cello ensemble’s parts achieving a constant play of effects, shimmering, haunting, often with gorgeous obbligato melodies. This cast much of the magic that was evoked in the telling of the story.

The angel Rahmiel, coming on the sorrowing, bereft, little heroine, Luna, uses all his powers to heal her broken heart, taking her to the East, to the West, to the North where the dreadful looking “Raven Man” provides a crucial step in the healing, and finally to the flower-blooming South where all is made right and Luna finds her happy self. The story is by the noted author, Cornelia Funke.

The course of Rahmiel’s journey with Luna is guided musically by Bruce Rameker with a warm, baritone voice, greatly sympathetic in tone and manner, by Daniel Taylor, a countertenor with a clear, arresting, fine-line voice, and by the soprano Lisa Delan, the co-creator of Angel Heart. Her voice is rich, her singing clear and lovely, deeply engaging. The children’s choir moved about in smaller groups, in attendance on these soloists, and sang very nicely.

The cello ensemble was definitely the magnetic force pulling it all together. Led from the principal chair by Matt Haimovitz, it was the group Uccello, composed mostly of his Canadian students at McGill University, Montreal. His playing was exquisite, as always, deeply expressive, even in the silky and flutey top register, the“violin” ranges where the imaginative arrangements by David Sanford, Lewis Spratlan, Luna Pearl Woolf, Jake Heggie, and Getty often took them. Much of the playing was done by the lead four cellos, sitting in front, the others coming into some of the arrangements. Now and again, the fine mandolin player, Dana Rath, pitched in, giving a tingling edge to the sound.

Robert P. Commanday, founding editor of San Francisco Classical Voice, was the music critic of The San Francisco Chronicle from 1965 to 1993, and before that a conductor and lecturer at UC Berkeley.