Akoka: Reframing Olivier Messiaen’s Quartet for the End of Time

On the cold and rainy night of January 15, 1941, in the unheated Barrack 27 of Stalag VIIIA in Görlitz, Germany, an audience of some 400 prisoners-of-war and guards listened in rapt silence as four musicians, performing on ramshackle instruments, gave the first performance of one of the great chamber works of the 20th century.  While it is doubtful that even the most devoted practitioner of historically-informed performance would want to recreate the premiere of Olivier Messiaen’s “Quatuor pour le fin du temps” (“Quartet for the End of Time”), this amazing backstory adds even further resonance to a work of stunning originality, power and spirit.  (For the full story, Rebecca Rischin’s “For the End of Time: The Story of the Messiaen Quartet” is highly recommended.)

What’s that?  You’ve never heard Messiaen’s Quartet?  Well then, you’re in for an extraordinary musical experience, one which will grow with each hearing.  In eight movements, variously scored for one, two, three or all four instruments, Messiaen combines his favorite preoccupations, such as birdsong, rhythmic and melodic symmetry, synesthesia (e.g., musical rainbows) and fervent, sentimental Catholicism into perhaps this incredibly original composer’s most accessible large-scale work.  Not for nothing has the Quartet appealed over the years to audiences steeped in psychedelia, mysticism, minimalism, new age philosophy, eastern religion and just about every other alternative life- or musical style associated with adventurous youth.

On their splendid, just-released 2008 live concert recording (with violinist Jonathan Crow and pianist Geoffrey Burleson), clarinetist David Krakauer and cellist Matt Haimovitz have framed the Quartet with a works that pay tribute to the remarkable clarinetist of its premiere, an Algerian Jew named Henri Akoka.  As prologue, the four musicians collaborate on a mostly-improvised, electronically-enhanced piece (credited to Krakauer) called “Akoka,” transforming elements of the Messiaen into a Klezmer-ish lament and dance filled with clarinet smears, cello scrapes (much like those Matt Haimovitz employed in his celebrated version of Jimi Hendrix’s “Anthem”), scratchy violin off-beats and strummed piano strings.

For the epilogue, Canadian producer Socalled (Josh Dolgin) “merges live samples of the musicians with old radio broadcasts, hiphop, cantorial singing and markers of time…” into a piece called “MEANWHILE…”  Of all the album’s ten tracks, this will probably age least well, especially its rapped passages.  For the present, it’s a stimulating modern commentary on a great musical work. 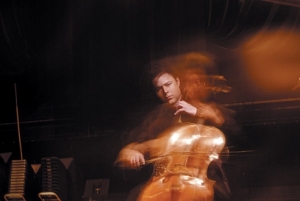 But it’s the performance of the Quartet that commends and rewards most of our attention here.  Not that there aren’t excellent alternative versions in the current discography, but this one can take its place with the best of them for both individual and ensemble excellence.  To cite just a few examples:  The quiet central passage of the 2nd movement, “Vocalise, for the Angel Who Announces the End of Time” has rarely been as mesmerizing.  David Krakauer’s superb rendition of the 3rd movement clarinet solo, “Abyss of the Birds,” is filled with personality, subtly reminding us that for all its mellow mellifluousness, the clarinet was also the instrument par excellence of the red light district, the shtetl and the Roma encampment.  And Matt Haimovitz’s modulation of both tone color and vibrato in the sublime 5th movement duo, “Praise to the Eternity of Jesus” are wondrous to hear — artistry of the highest order.

Messiaen’s Quartet for the End of Time is best experienced live — what great work isn’t?  In the meantime, and for keeps, this fine, imaginative CD is highly recommended, and will fit right into your shelf next to your Mahler, your Moby, your Moondog and your Mozart.  At least that’s where it is on my shelf.