Matt Haimovitz’s heart broke the moment his 307-year-old cello’s neck broke, but it could have been worse.

Haimovitz had just started giving a lesson at his Montreal studio on Feb. 2 to Cameron Crozman, a rising young cellist. They were working on the Poulenc Sonata when the 46-year-old Haimovitz got out of his seat to check the score and lost his balance while holding his prized 1710 “Matteo” Goffriller cello.

“I had to make a decision,” Haimovitz says in a telephone interview a week later. “Do I fall on top of my cello, or do I let go of the cello and not fall on top of it?”

As he tumbled to the floor, he pushed the instrument away.

“It was probably a good decision because had I fallen on top of it, it would have been in pieces,” he says. “At least now, it was very narrow [damage]. It just broke. The neck came off . . . . I was heartbroken.” 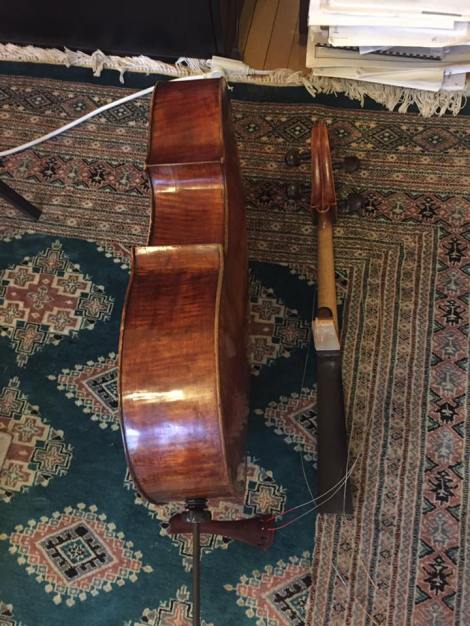 A photo from Haimovitz’s Facebook page captioned, “And this happened to my cello today. My heart is broken.”

What’s a dedicated musician to do? He continued the lesson for 90 minutes.

“We were both horrified, but music is comforting and you just keep going. Actually it was the best thing—you get distracted and don’t have to deal with it, so I could actually think clearly,” Haimovitz says.

“I love the Poulenc Sonata, but I’ll never think of it the same way,” he adds, now able to laugh about the accident.

In addition to the music, a couple of shots of single-malt whisky “definitely” helped, he says. “I wouldn’t say I got drunk but it certainly eased the pain.”

Haimovitz, who made his debut as a soloist at age 13 in 1984 with Zubin Mehta and the Israel Philharmonic Orchestra and has recorded dozens of albums, has owned the Goffriller since he was a teenager. Matteo has been Haimovitz’s companion in performances around the world, from concert halls to bars, coffee houses, and even crypts. Almost all of his recorded music was with the Goffriller, including the 2011 album Matteo: 300 Years of an Italian Cello.

His instrument was made by Matteo Goffriller, who lived from 1659–1742. A cello made by the Venetian luthier in 1733 was owned by Pablo Casals and is on long-term loan to the cellist Amit Peled. The “Pablo” underwent a major restoration in 2015 by luthier Julie Reed-Yeboah of New York.

The Matteo was owned by a London doctor who was accomplished enough as a cellist to play with violinist Isaac Stern and cellists Leonard Rose and Mstislav Rostropovich. After the doctor died, his wife sold the instrument to Haimovitz. He wouldn’t say for how much.

“Let’s put it this way,” he says. “It was affordable back then and it’s not affordable now. The widow actually made it more affordable. I think she knew my playing, and she wanted somebody good to be playing it and wanted to help a young artist.”

As soon as the ill-fated lesson with Crozman ended, Haimovitz went into crisis mode. He faced two immediate problems: getting the Goffriller fixed and finding a temporary replacement in time to continue his busy concert schedule, including a performance ten days later at the Montreal Museum of Fine Arts of the Bach Cello Suites with overtures he had commissioned.

Despite his despondency, he had faith that the cello wasn’t ruined. “I knew there are good people out there that can take care of these things, and that in my gut I knew it’s repairable,” he says.

He decided to book a flight to New York, where he took the cello to Reed-Yeboah’s shop. He was familiar with her work on the Pablo and had dealt with one of her luthiers for years.

“He knows my instrument very, very well and I always appreciated his care and sensitivity and meticulousness and I trust him,” Haimovitz says. “It takes a lot of trust to leave the instrument with someone.”

Because the repairs are expected to take six months, the next problem was finding a substitute cello. He called friends and colleagues for leads. He located a late 17th-century Tononi that was available for loan, and brought it back to Montreal from New York.

“I like the ‘bassiness’ to it. Doing a Bach cycle, that always helps,” Haimovitz says. But it was also much larger than his Matteo. On Thursday, the Quebec-based Canimex Foundation agreed to lend him a three-century-old Grancino for two months.

“It was much more like my Goffriller in terms of more a tenor instrument rather than the Tononi, (which is) more of a baritone. Also it was a little smaller, so right away I took to it,” he says.

Meantime, Matteo is undergoing surgery in the cello hospital for the next six months.

“Right now it’s kind of sickening because the cello is in pieces, the top and the bottom and the back are removed,” Haimovitz says. “But as it comes back together it’s incredible. It’s basically giving new life to it. Everything has to be looked at. The old cracks, some of them may have opened because of the impact. Even if they haven’t opened, they’re going to reshape the top because the top sunk over the years. That happens and you have to create a mold. They did the same thing with the Casals cello. . . . I’m incredibly excited about that because I’ve been playing really near the sides of the cello because of that sinking. So if it’s arched again, to me it’s going to be a joy to be able to clear those sides.”

Then there’s the uncertainty of how it will sound.

“It takes time to settle in. Over the 30 years that I’ve had it, it’s had its evolution in sound. So we’ll see what state it is in when it first emerges, although in my gut it’s going to all come together,” he says. “I remember the sound very well, so I’ll be looking for it—or better. With the new arching, maybe it will be more alive.”