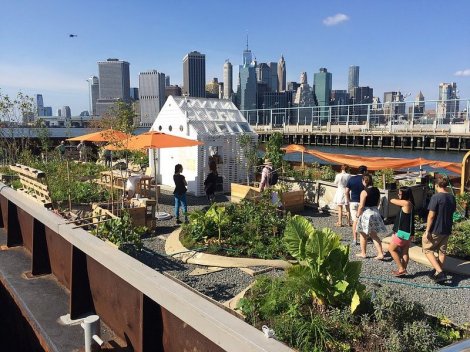 Concerts and films in parks, tours for the public and for our Untapped Cities Insiders, an inflatable bubble, a floating food forest and more to check out this week in New York City!

We’re bringing Untapped Cities Insiders on a tour of Swale, the floating food forest, with founder Mary Mattingly. There are are two spots left so join us!

Tonight, the Chelsea Music Festival begins celebrating 333 years of Bach. This multi-sensory art festival is one of our favorites, and one the New York Times has called, “a jewel of a festival.” We’re offering free tickets to Untapped Cities Insiders to two event on the 13th (see below).

Films on the Green series from the Cultural Services of the French Embassy continues, this time in Washington Square Park with the movie The Scent of Green Papaya by Trần Anh Hùng (in Vietnamese with English subtitles).

The Hot Dog Bus, one of our 40 outdoor art installations to see in June, starts running today in Brooklyn Bridge Park and will be giving out hot dogs!

Join us for a Tour of the Secrets of the Brooklyn Bridge to learn about its old Cold War fall out shelter, the hidden champagne vaults, the bridge jumper survivor’s support group and so many others…

Also join in for our next iteration of the Tour of the Remnants of Penn Station, led by our tour guide Justin Rivers. Rivers is also a playwright who penned The Eternal Space, an off-broadway play about the demolition of Penn Station

We are also running our hard hat tour of the abandoned hospitals on Ellis Island and our Underground Tour of the NYC Subway.

Domino Park opens in Williamsburg! Untapped Cities will be leading free tours of the new park in partnership with Two Trees, the developer of the Domino Sugar Factory site. The tours will run every hour, on the half hour from 12:30 to 3:30 PM, no advance reservations but tour will be first come first serve until capacity.

Join our popular tour of the Secrets of Grand Central Terminal to see the hidden tennis courts, learn about a movie theater that was once inside, and tons of other little known fun facts about the landmarked building!

Also join in our Secrets of Central Park and discover the secret bolt that dates back to the laying out of NYC’s street grid (and many more fun tidbits).

Democracy Lab at Spacebuster opens at the Brooklyn Library, one of the 40 outdoor art installations we picked this month for you to discover – it’s literally a pop-up inflatable pavilion and it will make Grand Army Plaza its home for a week.

Photographer (and friend of Untapped Cities) Nathan Kensinger will lead a walk for the Brooklyn Library as part of their Democracy Lab at Spacebuster. He will be joined by several artists from Chance Ecologies, the project he co-curates, as they consider artistic responses to the wild plants and animals that have found a home in this dense urban environment.

The New York Philharmonic will give free concerts in NYC Parks for the next five days. Check out the schedule here.

As part of the Chelsea Music Festival, attend the outdoor concert “Bach 333: Master of Adoration, Variation, and Transformation” on the stunning grounds of the General Theological Seminary featuring cello soloist Matt Haimovitz and festival cellists Jonathan Butler, Angela Lee, and Joseph Lee. The concert’s outdoor intermission reception will feature gelato sponsored by Chef Lorenzo Franchetti. Untapped Cities Insiders can get free tickets to the concert, as well as a tour of the historic churches of Chelsea from Save Chelsea.

In the evening, don’t miss the first-ever photo installation at Four Freedoms Park on Roosevelt Island. In partnership with the Park, we’re offering free tickets to Untapped Cities Insiders to the launch party for the exhibition – tickets you can’t buy because it’s invite only!

Check out our full list of behind the scenes tours in NYC!