After fifteen months apart, Matt Haimovitz and his beloved Goffriller cello get reacquainted. 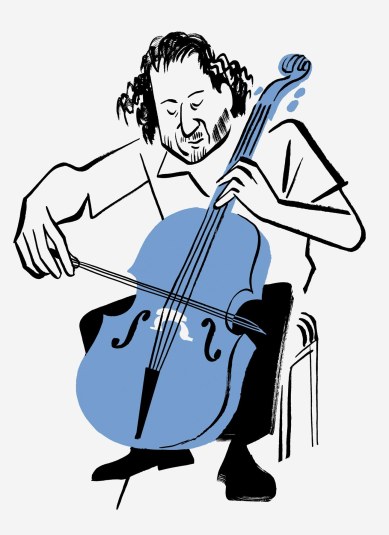 On a recent Thursday, Matt Haimovitz, the forty-seven-year-old virtuoso cellist, packed an empty instrument case into the back of his car and drove from his home, in Montreal, to a friend’s apartment on the Upper West Side, where he’d be crashing. The case was for Haimovitz’s rare, multimillion-dollar cello, which he calls Matteo—after Matteo Goffriller, the seventeenth-century Venetian luthier who built it. He had played it for thirty years, until, fifteen months earlier, while giving a lesson to a promising Canadian student, he dropped it, and the cello’s neck snapped. Since then, the instrument had been undergoing extensive repairs by a team of five luthiers at Reed Yeboah Fine Violins, near Columbus Circle. Now the shop had called to say that Matteo was ready for release.

The relationship between cellist and cello is unusually tight. “It’s probably the instrument closest to the human voice in range,” Haimovitz said. He described the necessity of wrapping oneself around the cello while playing. “You have to be good friends, intimate friends.” On the afternoon of the pickup, Haimovitz, who is short, with a head of unruly dark hair, was pacing in his friend’s living room, wiping sweat from his brow. He had planned to give the luthiers a private concert in their shop, but was nervous about Matteo’s condition. “I think somebody’s been playing it for them,” he said. “I haven’t asked too much. I don’t want to know!”

Just before the accident, Haimovitz and his student had been poring over a Francis Poulenc sonata. Haimovitz was on Matteo, his student on a loaner Stradivarius. “I was reaching for the Poulenc score, and I was standing up, and I lost my balance,” Haimovitz recalled. “I tripped, with one foot over the other”—he demonstrated—“and I had to sort of make a decision. Do I land on the instrument, and let it basically go to pieces? Or do I let go of it and just hope for the best?” He chose the latter. “It didn’t seem like that big of an impact,” he said. “But I looked down and there it was, in two pieces.”

The accident led to the discovery of other, more insidious problems: Matteo’s three-hundred-year-old insides were collapsing. The top was losing its arch; the cracks were widening. “A domino effect,” Haimovitz said. He visited every two months. Once, he arrived to find cello parts scattered around the room, attended to by different experts, like an intensive-care unit. “For thirty years, it goes everywhere with me, and then, so suddenly, not to have it around? And then to see it—” He broke off, full of emotion.

On the Upper West Side, Haimovitz hailed a cab, carrying the empty case. He reminisced about meeting Matteo in a London instrument shop, when he was a seventeen-year-old prodigy. In the decades since, they’d played at a desecrated synagogue in Kraków, at CBGB, on a bluff in Montana, and in a Venice jewelry store that used to be Goffriller’s studio. (“I asked the owners, ‘Do you mind if I play some Bach here?’ ”) Once, while Haimovitz was in Israel to perform at a festival, an explosion went off not far from where he was staying. “I ran to the bunker, with the cello,” he said.

On Haimovitz’s last visit, Matteo had begun to resemble himself. But, when he tried to play the instrument, the sound was off. “There was a range of just two or three notes on the D string, mid-range, which I could recognize,” he said, despondently. The luthiers assured him that it would open up with additional hours of play.

At the repair shop, Haimovitz rang the doorbell and gave his shoulders a little shake. “Oh, I’m nervous!” he said. Inside, a small group was gathered around glasses of prosecco. Haimovitz’s wife, the composer Luna Pearl Woolf, looked on anxiously. Matteo was on a stand near the center of the room. “Oh, it’s gorgeous, you guys—wow,” Haimovitz said. He plucked a few strings.

“We have a good team, I told you,” Kenichi Matano, the workshop manager, said.

Haimovitz sat down and played a few hoarse scales, before launching into a jaunty tune, the prelude to Bach’s Cello Suite No. 1. He ended on a long note, and then sat in silence. “Hmm,” he said.

“You need to play it a little bit more,” Matano coaxed.

Haimovitz played for a few more minutes, then stopped.

Woolf, tentatively: “Is it possible that in its new iteration it wants a different kind of bow?”

A new bow was brought, and Haimovitz played again. He leaned in, listening. “Yeah,” he said. He played a mournful tune, Philip Glass’s “Overture,” and came up smiling: “Very cool!” Everyone applauded.

Afterward, flushed, Haimovitz was more circumspect. While playing, he said, he couldn’t help thinking about the old Matteo. “There were moments where it was, like, I’m missing certain things, where’s that?” But then something changed. “Gradually, the vibration felt the same.” He accepted a glass of prosecco. “It’s a process,” he said.

BY: Anna Russell
READ AT: The New Yorker