Music and art to share for families living through quarantine together

All Through the Night – from Angel Heart, a music storybook 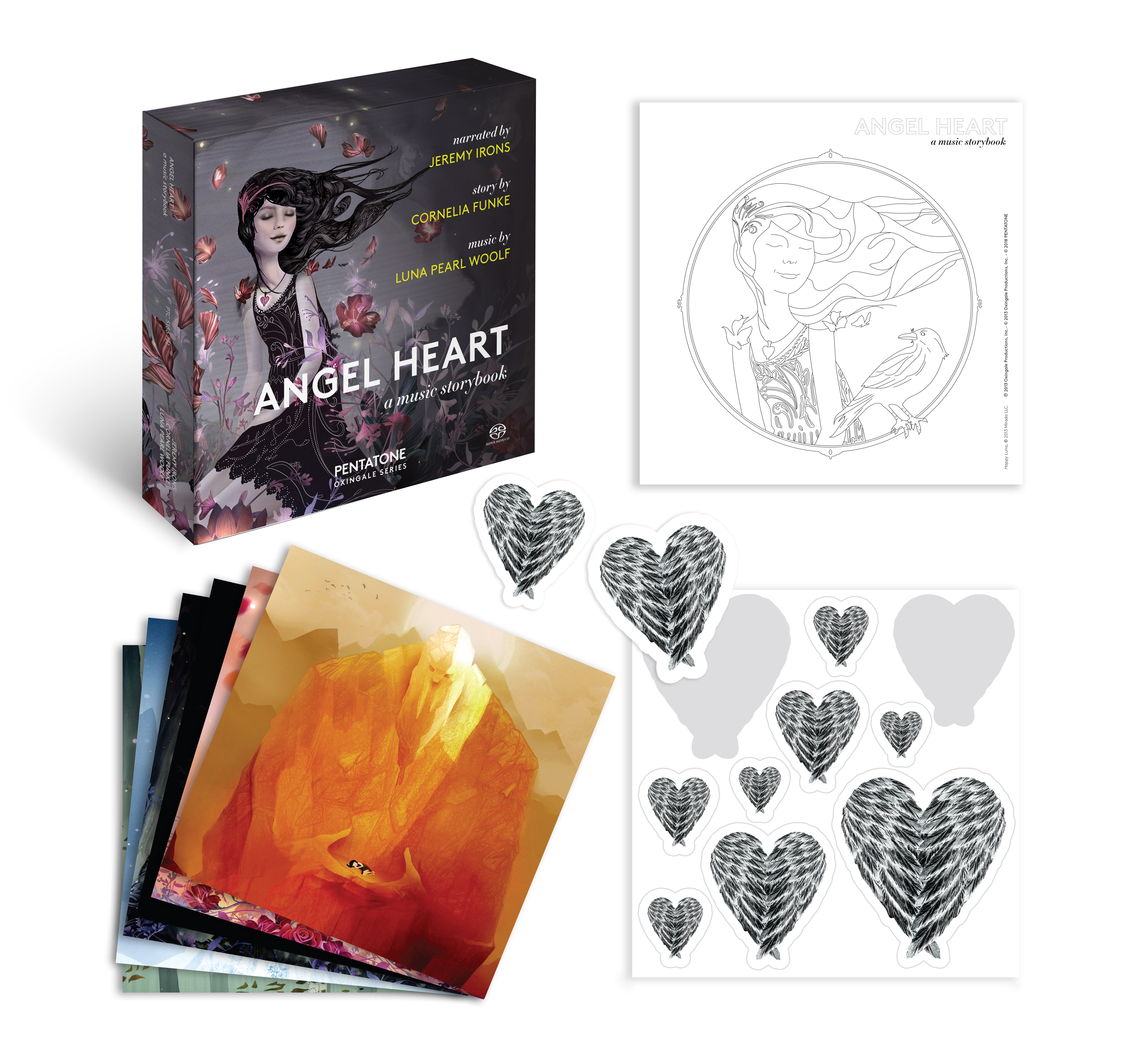 Originally released in 2013, and accompanied by premiere performances in Los Angeles and at Carnegie Hall in New York, this is the first international release of Angel Heart, from the PENTATONE Oxingale series.

The whimsical tale – narrated by Jeremy Irons above the music by Luna Pearl Woolf as performed by Matt Haimovitz and his cello ensemble – paints a colourful nighttime journey of magic and healing. Rahmiel, the angel of love and compassion, discovers Luna, a young girl with hair as dark as the night, crying by a pond. The angel fills the
night with laughter and song and rainbows made from starlight, but Luna’s heart is still in a thousand pieces. Rahmiel knows someone: he takes her to the witch that can heal broken hearts who calls on a man made of raven feathers for help. She tells Luna, “we know best who we are when we are very young.” Together Rahmiel and a newly child-like Luna visit the Spirits of the East, North, West, and South, whose lullabies wash
away and heal her pain, mend her heart and make it strong again. Luna smiles in her sleep as she turns back into the beautiful girl that Rahmiel first saw. The Angel’s work is done.

Interspersed along the tale are songs and lullabies from disparate corners of the world, including the Welsh folksong “All Through the Night”; “Ho Ho Watanay”, an Iroquois lullaby; the German “14 Angels”; “Unter Beymer “(Beneath the Trees), sung in Yiddish; the traditional “Sleep Baby Sleep,” and others.

CORNELIA FUNKE is one of world’s most successful children’s and young adult authors. Her books have been translated into 37 languages, published in 43 countries, and have worldwide sales of more than 20 million copies. Her most popular works include Dragon Rider, The Thief Lord, the Inkheart trilogy and MirrorWorld, a fantasy series for all ages. The German author writes her stories longhand in her writing house in California.

American soprano and Angel Heart co-creator LISA DELAN is recognized for her versatility and vast repertoire. Opera online praised her voice for its “luminescence … with a creamy, soothing tone that can be spellbinding.” Sequenza 21 wrote that “as a song interpreter, she may well be unequaled.”

MATT HAIMOVITZ is praised by The New York Times as a “ferociously talented cellist who brings his megawatt sound and uncommon expressive gifts to a vast variety of styles.” Along with performances around the world, he currently holds positions at the Schulich School of Music in Montreal and as the first John Cage fellow at The New School’s Mannes School of Music in New York City; three cellists from each studio now comprise UCCELLO. Haimovitz’s recent recordings for the PENTATONE Oxingale Series include ISANG YUN: Sunrise Falling, a centennial commemoration of the Korean composer’s life and music.

For further information on the multitude of artists, writers, and musicians who created Angel Heart, please click here.